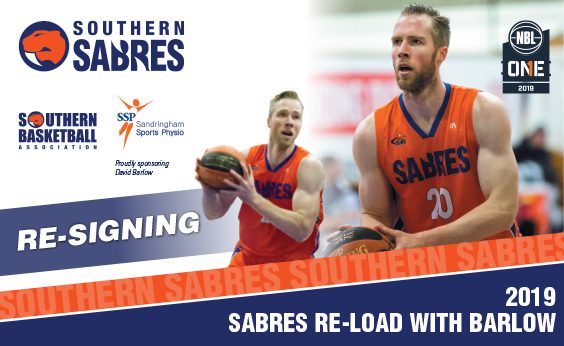 The SBA are excited to announce the return of favourite son David Barlow to the Southern Sabres for the inaugural 2019 NBL1 season.

About to embark on yet another playoff campaign, Barlow’s signing is a positive step for the new look Sabres. Head Coach Nathan Cooper-Brown spoke about his excitement at coaching his long time friend.

“This is a special signing for me. I’ve been friends with Dave for over 20 years, and to now have the privilege to coach him is something I’m incredibly excited about.”

Cooper-Brown added, “I think Dave is one of the best professionals this country has ever produced. The way he takes care of himself, his dedication to his craft and his family, and the success he’s generated through all that hard work is inspirational. And with a lot of our roster being made up of young, high potential athletes, I couldn’t think of anyone better to come in and role model what it takes to be the best. I look forward to his input, and working closely together to re-establish the Sabres as a leading program in this country.”

Men’s program head, Nathan Crosswell was equally excited for David to re-join the Sabres. “David played with us last season and had some great performances in the second half of the season. He creates some real match-up problems with his ability to shoot it and put it on the floor. His SEABL form has carried over to the current NBL season where he is obviously a major contributor for Melbourne United as they embark on their 2018 championship defence.”

A two time Olympian and Sabres junior player, Barlow has been instrumental for Melbourne United in a starting role this season, averaging 11.7 points, 4.4 rebounds and 2.1 assists per game. Barlow averaged 11.6 points and 9.6 rebounds a game last season in the SEABL as the Sabres made a belated run towards the post-season.

Barlow will commence with the Sabres once his playoff commitments with Melbourne United are completed.

The NBL1 season commences for the Sabres on Friday 29th of March away against the Hobart Huskies. Pre-season practice matches will be played at Dandenong Basketball stadium across the weekend of March 16th and 17th, with details and fixturing to be made public soon. Stay tuned to our social media platforms for more signings and announcements as the countdown to the season intensifies. 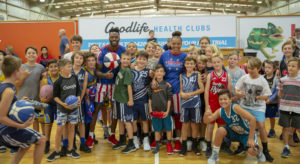