The Boomers continue their preparations for the FIBA World Cup tonight as they battle the top team on the planet, Team USA, at Marvel Stadium. There is a lot of confidence for this Australian team, stacked full of NBA, NBL and European stars as they look to win their first medal at a major tournament. As we take a look at the 12 set to battle the top-ranked team in the world, there are sprinklings of orange and blue everywhere.

Three players and two coaches in the Australian set-up have donned the Sabres uniform throughout their careers.

The most recent addition to the Boomers squad, David Barlow, is a Sabres lifer. Barlow started his career with Bullits Basketball Club before joining the Sabres representative program in 1992. From there he won a myriad of MVP awards and made several state teams before heading over to Metro State University (Colorado) in 2002. He was awarded his first green and gold jersey in 2006 and has been a mainstay since. He joins this Boomers team after a solid 2018/19 NBL season with Melbourne United, averaging 12 points, 4.5 rebounds and two assists. He also dominated the 2019 NBL1 season, earning club MVP honours with 22.7 points, eight rebounds and four assiwts.

An NBA champion, NBL MVP and Defensive Player of the Year, and 16 year Boomer, Andrew Bogut donned the blue and orange for his last two years of junior basketball. He also played domestically for the Mentone Mustangs before jetting off to the Australian Institute of Sport and eventually, the University of Utah where his international career skyrocketed.

He might have only played one season at the SABREDOME, but Joe Ingles had a massive impact for the Sabres, averaging 15.6 points, 5.9 rebounds, 3.5 assists and 2.5 steals in the 2007 Big V season.

It is not only the players that have a history with the Sabres, but also coaches. Boomers Head Coach Andrej Lemanis began a very successful coaching career with the Sabres VBA team in 1993. Here he honed his craft and transformed himself into one of the best coaches in the country and a three-time NBL championship winning coach.

David Patrick, who recently joined the Boomers as an Assistant Coach, spent his junior days in the Bayside playing for the Sabres and domestically for the Beaumaris Sharks. He decided he loved wearing orange so much that he accepted an offer to play college basketball at Syracuse University. Following his professional career (including stops in the NBL, England and Spain) he took up coaching and is now the Head Coach at Division II College UC Riverside in California. 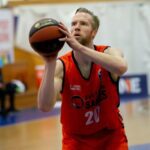