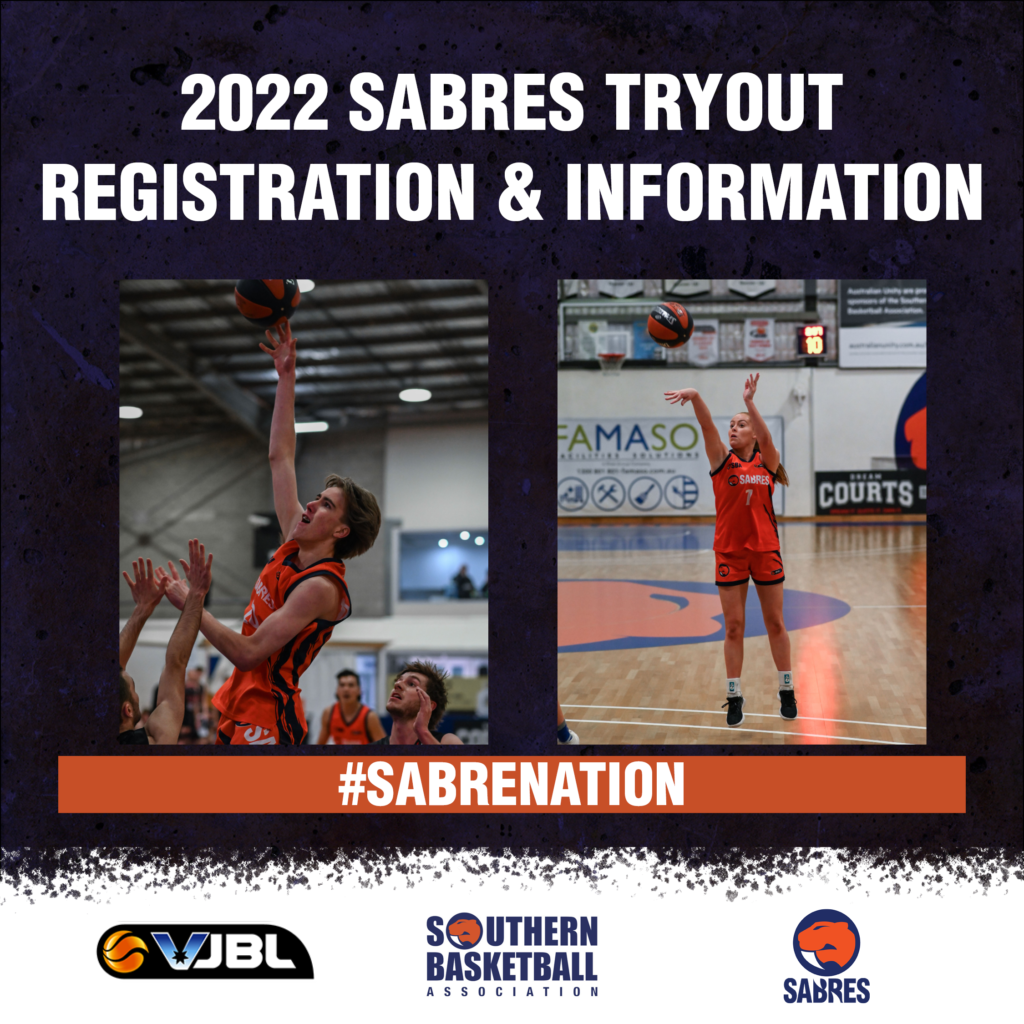 2022 Sabres Tryout Information – UPDATED 17/11/2021
Important Tryout and Grading Information for Parents and Players:
Please note that tryout times, dates and venues may change at short notice due to venue availability

Sabres tryouts will be subject to COVID-19 restrictions. Session times, days and venues may change at short notice. We are asking all families trying out to be patient and flexible as we work through this time.

– Please ensure players arrive 30 minutes prior to their allotted start time to register their attendance.
– Players need to bring their own basketball and a drink bottle
– Tryouts will be closed to parents;
– Parents can attend from the practice matches on the 19th of November;

Sabres teams will not be entering the Southern Peninsula Tournament.

Temporary uniforms will be provided for players that are NEW to the Sabres program for our practice matches and VJBL Grading Phase #1 once preliminary squads are selected;

Temporary uniforms will be provided for players that are NEW to the Sabres program for our practice matches and VJBL Grading Phase #1 once preliminary squads are selected;

The tryouts will be conducted using size 6 basketballs, with a move to size 5 basketballs from January 2022.

Team Selections for 2022:
We are unable to guarantee all of our returning Sabres players from 2021 a spot in a team for the 2022 VJBL season.

National Plan: Phase C
80% of 16+ fully vaccinated
Indicative date 5th November 2021. Subject to Public Health consideration of epidemiology at the time.
The SBA will have a COVID Bio Safety Officer at each entrance to check compliance; the Services Victoria
App is linked to out QR code.

National Plan: Phase D
80% of 12+ fully vaccinated.
Indicative date two weeks later, subject to Public Health consideration of epidemiology at the time.
Face masks will be required to be worn with the following exceptions.
Players whilst warming up and during trials
Coaches when tryouts commence on court
Social distancing where possible

Tryout registrations help our Coaching Directors better understand how many players are intending to tryout and how many teams will be across all age groups and across both genders. We are also looking for more Under 12 boys and girls (SBA domestic players born in 2011, 2012 and 2013) to join our ranks for 2022.